CBC: In The Future, War Is Going to Belong to The Drones

CBC has interviewed the ATLAS team. You can read the digital version below. 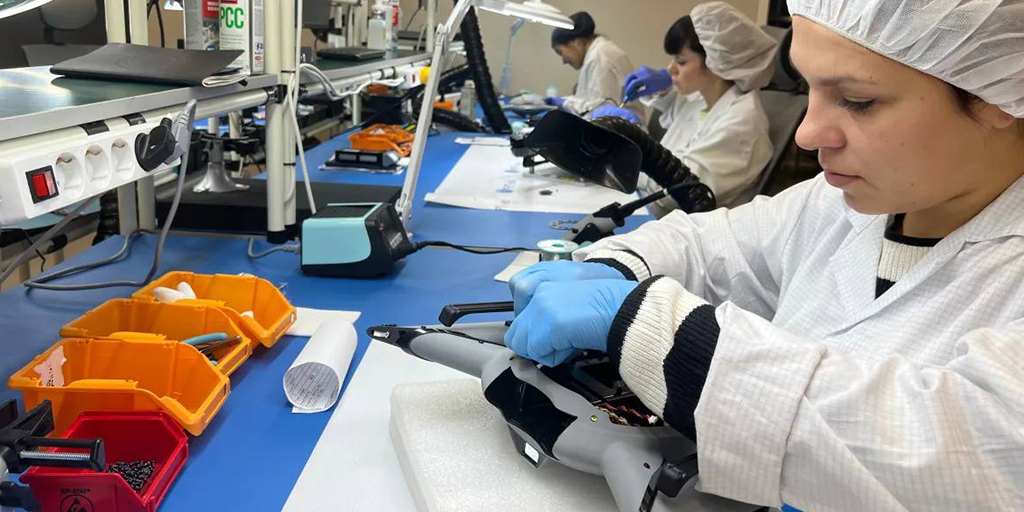 Atlas Aerospace hired 29 Ukrainian refugees and trained them to make surveillance drones, which are being sold and shipped to Ukraine, where they are becoming an increasingly important tool on the battlefield. (Corinne Seminoff/CBC)

These women fled the Ukraine war. Now they build drones abroad to help fight it.

The mother of two has a law degree and before fleeing Ukraine, she worked at a library in her home of Dnipro. For the past month she has been employed on a production line, assembling drones destined for the front lines in Ukraine.

"My brother is there in the war," she told CBC in an interview at the end of November at a drone production facility in Riga.
"You're doing this and think, 'Well, maybe it will help in some way. Maybe this will bring victory closer.'"

Zaritskaya is one of nearly 30 Ukrainian refugees working at Atlas Aerospace — a drone manufacturer that has already sent 400 kits to Ukraine, where unmanned aerial vehicles (UAV) are rapidly changing how the war is waged.

Both Russia and Ukraine are using a wide-array of drones for surveillance and for combat, which can be carried out by remote control and at a distance.

The technology, which includes drones made by defence contractors along with consumer drones called quadcopters retrofitted with munitions, enables soldiers to be stationed further from the front lines and launch targeted assaults.

A video published at the end of October showed a maritime drone, which appeared to dodge fire as it barrelled on top of the water toward Russia's Black Sea fleet off the coast of Crimea.

The nine-month long war has proven to be fertile ground for drone developers who are creating and programming new models based on what has been learned from the Ukrainian battleground.

In the rapidly evolving area, experts say there is a push for not only cheaper, smaller drones, but truly autonomous models that can be deployed as part of a swarm.

A group of drones would not only be able to identify targets, but make decisions around whether to attack those targets without needing commands from an operator on the ground.

"It is a game changer," said Ivan Tolchinksy, the CEO of Atlas Aerospace. "In the future, war is going to belong to the drones.”

From skiing to surveillance

For Tolchinsky, producing drones for Ukraine is somewhat of an intersection of all his past experiences.

He was born in the city of Donetsk in eastern Ukraine, an area that Russia and the separatist forces it controls first seized in 2014.

Tolchinksy left Ukraine when he was 11, and completed his education in Israel, before fighting in the 2006 Lebanon war as a sniper.

He made his first drone around eight years ago to capture video of a ski trip to the Swiss Alps with some of his university friends.

After posting his video to YouTube, he was contacted by an interested investor, and now his rapidly growing company, which traditionally fulfills contracts with NATO countries and search and rescue groups, has pivoted most of its production to supplying Ukraine.

Its surveillance drone weighs approximately 1.5 kg without the accessories, like the accompanying screen used by soldiers on the ground to control the drone and watch its live video feed.

The entire kit which also includes batteries, costs about $30,000 Canadian and he says it is sold to Ukraine at a discount.

Tolchinsky, who has made a number of trips to Ukraine to deliver the drones and meet with soldiers, says small teams are using them to detect Russian positions and then relaying that information to artillery units.

The company, which has gone through a rapid expansion, hired 29 Ukrainian refugees, who all needed to go through background checks at the request of the Latvian security services.

Anyone who fled Ukrainian communities now occupied by Russia was filtered out of the hiring process. Tolchinsky says employing them would be too risky, in case they had Russian contacts to whom they could feed information.

Some of his employees previously worked as doctors and or at a bread factory like Alexandra Liaskovets, 29, who spoke to CBC as she put together her second drone.

"In the beginning everything was hard," she said. "It was all new to me, new vocabulary. But now with each day I am learning more."

Most of the employees speak very little English, which is the language the directions are printed in, so they follow along with large photos that display each step of the drone-building process.

Tolchinsky has plans to deliver several hundred more drones to Ukraine over the next six months, and the company is working toward another model that could move beyond surveillance to combat and be completely autonomous.

"What we see now is that almost all crashes happen because of human mistakes," Tolchinksy said.

The war in Ukraine has been "a real hot house for drone development" according to David Hambling, a London-based technology journalist and author of a book about drone warfare.

He says the next big push is a shift toward autonomous drones which can be launched in swarms.

The Iranian Shahed-136 drones, which are frequently referred to as kamikaze drones because they explode when they reach their target, have been deployed by Russia in groups, but they don't use artificial intelligence and are simply pre-programmed with GPS co-ordinates.

While they have caused significant damage to Ukraine's power grid, Hambling says they are "not a very advanced drone" and a lot of the components just "come off the shelf."

Inside an undisclosed location in Kyiv, a Ukrainian special forces soldier who would not reveal his name, showed a crew working for CBC News some of the kamikaze drones that the military had shot down.

When contacted by CBC, Tallysman's president said the company is not aware of how its parts ended up in an Iranian made drone, but suspects it was leaked to Iran from somewhere in Asia.

Hambling says the kamikaze drones present a major problem as they are more expensive to shoot down with air defence than they are to produce as they are far from cutting edge.

Instead, he says militaries and defence companies are working on developing drones that work together like a "flock of birds."

"They all see where each other are and they all avoid each other and they're all capable of co-operating," Hambling said. "When they're attacking something, they will attack different targets … rather than all going for the same one."

Hambling says the U.S. navy is working on a secretive project called "Super Swarm," which is a plan to launch thousands of drones at the same time in order to overwhelm a potential target.

It's a shift in strategy that he says is having a serious impact on the cost equation around drones in combat.

The U.S. air force's Reaper drone, used extensively in Iraq and Afghanistan, is equipped with high-tech sensors and GPS guided bombs, but it costs several million dollars, which means a big financial hit if one of them is brought down.

"I think there is going to be a big push for mass production of small, cheap, expendable drones," Hambling said.

By next year, he wants to produce fully autonomous drones that would allow one operator to launch as many as 50 at a time.

Instead of having soldiers monitor several screens at once, he says the drones will work together to send back a surveillance report.

He envisions every Ukrainian brigade being equipped with drones and says that's where he's focusing his efforts.

"I'm not meeting other customers at all this year," Tolchinsky said. "I am just meeting Ukrainian customers because I just want more and more feedback to improve our system and see how we can help."